Update: 07/02/2018: The final solution for this problem is here:
How To Connect Bluetooth Headset Or Speaker To Raspberry Pi 3


This post will show you how to connect a Bluetooth headset (microphone/speakers) to your Raspberry Pi, it is a sum up of several weeks I’ve spent trying to find a stable solution. 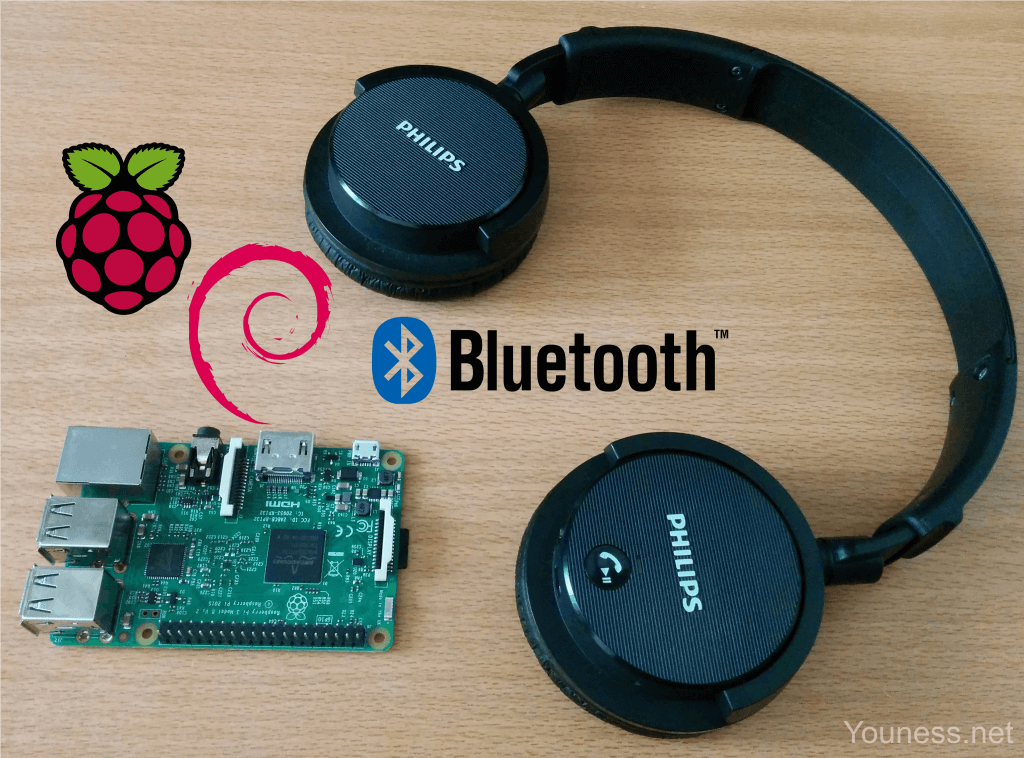 I took time to mention relevant and exhaustive information, so you don’t need to go through all Google results and workarounds that I already read and tested with no success.

If you are here for curiosity, know that the post is quite long, so make yourself comfortable.

Q: What does this mean in command-line?
All BlueZ tutorials and tips where you see ALSA commands (aplay, arecord,…) are now useless.

That’s not all the story:

For those who don’t know the difference between A2DP/HSP/HFP:

HFP, Hands-Free Profile, the device acts as a phone, so it exchanges audio in/out and telephony commands.
E.g. Hands-Free mode in car

I’ll do it in that incremental order, A2DP, then HSP, and last HFP.

After this long synopsis, let’s put the pieces together.

Step 0: Start with a clean base

I recommend starting with a fresh Raspbian Jessie, in order to avoid any existing configuration files, the need to purge packages, …etc.

These small details can save you lot of time.
Raspbian Jessie out-of-box supports only A2DP with PulseAudio.

At this line we have everything to set up A2DP profile connection.

Most of the time GUI Bluetooth tools will do it, but regarding all the core changes I mentioned above for each layer, I personally don’t advice you to use anyone , I tested Blueman, BlueDevil… not only it will not work, but you will not get any information or logs about the errors.

Tip: Use dedicated console for Bluetooth and keep it open.

Turn on Bluetooth controller:
power on

Start the agent:
agent on

Turn on the headset, for mine I press and hold till I see the white blinking LED.

Start the scan:
scan on

After some seconds, you will see the headset name and MAC address

If, at this stage, the headset is still connected, you are very lucky.
If the headset is disconnected right after connection, this is the “normal problem”.

Q: How to know that the headset is disconnected:
Mine emits 2 short beeps. You can also see it in the console:
[CHG] Device xx:xx:xx:xx:xx:xx Connected: no

Great, the problem is that no PulseAudio daemon is running, so start one:
pulseaudio --start

(In other cases, the problem can be the opposite, you will find that PulseAudio was started and monopolized by other services. I’ll talk about this later at the end of the post)

Now try again to connect the headset, it should work this time.

You’ll find two, the built-in one of Raspberry Pi, and the headset one:
bluez_card.xx_xx_xx_xx_xx_xx

Two things to know about PulseAudio:

“In the beginning, the Universe was created. This made a lot of people very angry, and has been widely regarded as a bad move.”

– The Hitchhiker’s Guide to the Galaxy

As said before, HSP profile is supported with PulseAudio 6 and newer.
The only solution that I see here is to build PulseAudio from Git sources.


Update: 08/10/2016
I’m able to build PulseAudio from sources with some limitations, see below instructions:
FYI, I tried Arch Linux ARM, don’t waste your time, Bluetooth support is NOK too..

I choose to build the version 6 to avoid unwanted new features that may need extra work and dependencies.

This method was done with the latest Raspbian Jessie Lite (2016-09-23). This version comes without pre-installed PulseAudio, but if you are using the default Raspbian image or the one installed with NOOBS, purge it:
sudo apt-get purge pulseaudio

I will sum up here all errors I encountered (in case people search them by copy/paste):
./bootstrap.sh: line 46: intltoolize: command not found
configure: error: Unable to find libltdl version 2. Makes sure you have libtool 2.4 or later installed.
configure: error: *** sys/capability.h not found. Use --without-caps to disable capabilities support
No package 'json-c' found
No package 'sndfile' found

The script should now ends correctly, and in the command line you can see a table of the configuration done, with enabled/disabled parts. On my side: udev, bluez5, ofono, native-headset, alsa, X11, systemd, … were not enabled, so I installed additional libraries:
sudo apt-get install libudev-dev libsbc-dev libbluetooth-dev libx11-xcb-dev libasound2-dev libsystemd-dev libsamplerate0-dev

Then, make and install PA6 (this will take some time, take a coffee).
sudo make
sudo make install
sudo ldconfig
The last command to avoid some errors of shared libs not found.

Check if it is running:
ps aux | grep pulse

Start another command line window and connect your headset like explained for A2DP before.

One annoying bug is that pulseaudio daemon will be terminated some seconds after connecting the headset, to avoid this, change the daemon configuration:
sudo nano /etc/pulse/daemon.config

At this step, I can listen to audio with A2DP profile, meaning Pulse Audio is well installed.
However, when I switch to HSP, I hear nothing, here I’m still searching for the rootcause.
If you find the solution before me, please post it.

Step 3 (Not yet started): Connect the Bluetooth headset (HFP)

To be done after step 2.

Step 4 (Not yet): Create autorun script

It will be very useful to create a script that make all above things, to be done.

If you have any question or remark, feel free to comment.
Good luck.